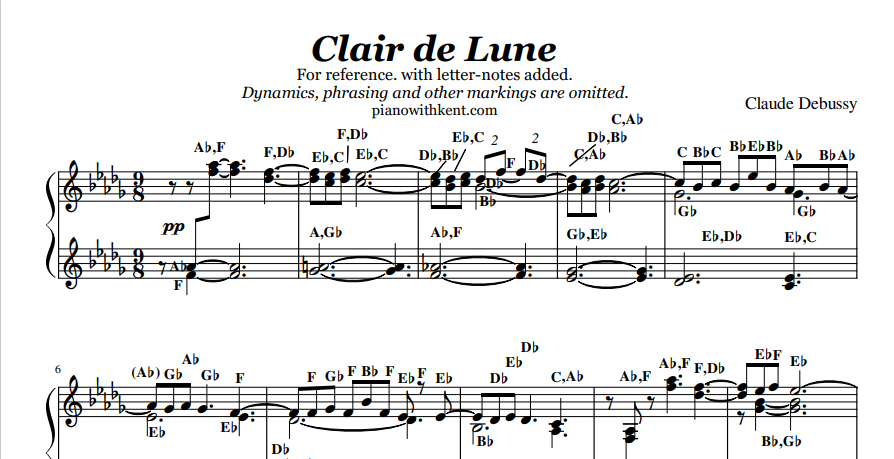 The product link above has all the important details about this sheet music, available now for PDF download.

In a nutshell, this is the complete Clair de Lune by Claude Debussy (the third of four movements from a larger piece, called Suite Bergamasque).

Each note is labelled with its musically accurate letter name, such as G, F#, Bb.

What is the official, original name of Clair de Lune?

Claude Debussy, a leader of what came to be known as the French Impressionist school of music composition (which includes Ravel), is the composer of this world-renowned and timelessly gorgeous work for solo piano.

When was Clair de Lune written?

Clair de Lune was first published in 1905, as the third movement of a four-part work called Suite Bergamasque. Debussy’s daughter Claude-Emma, known as Chouxchoux, was born in this same year.

Clair de Lune, in French, means ‘moonlight.’ (Note: if you’re an English-like language speaker, this might translate more literally to ‘light of the moon.’) Debussy’s Clair de Lune takes its title from a poem of the same name, which Debussy greatly admired.

Written by French symbolic poet Paul Verlane in 1869, Debussy had already put his impressions of this poem called Clair de Lune into musical form, in two prior works, before honoring it with this piece.

Debussy added the title Clair de Lune to his manuscript, as the new title of Promenade Sentimental, just before Suite Bergamasque was published as a whole, in 1905.

Bonus fact: About the given name Clair

Clair, as a given French name, means, not surprisingly: light, clear, or bright!