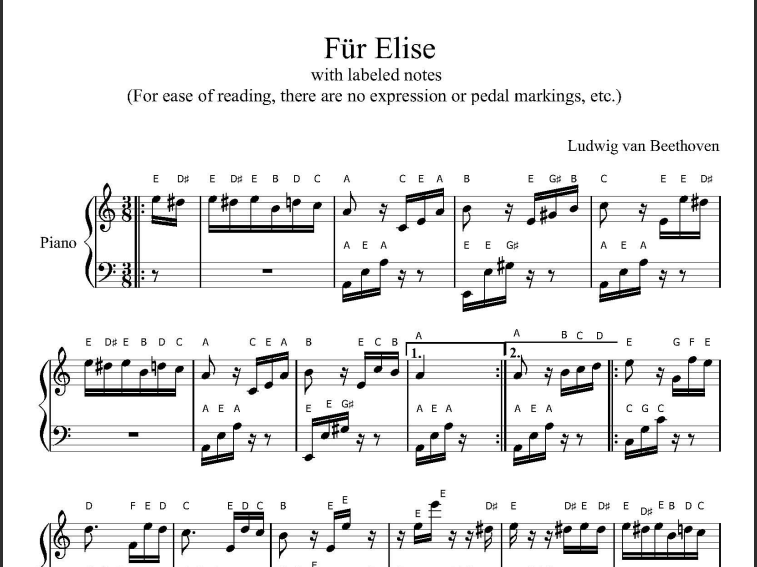 Today I’m very pleased to announce a brand new sheet music publication on ‘Read Piano Music Now!’ (this site). What we have for you today is Für Elise Sheet Music with Letters and Notes Together.

For details, simply click on the product image immediately below (this link takes you directly to the product itself – on this website).

This is the COMPLETE and original Für Elise (Bagatelle No. 25 in A minor)!

Aside from what you can read in the product description, here are some interesting things about Beethoven’s Für Elise that you might not know!

When was Für Elise written?

It’s not actually known by historians exactly when Beethoven wrote Für Elise. We can know, of course, that it was written in his lifetime, which was 1770 (at least he was baptized then) to 1827.

Für Elise, officially Bagatelle No. 25 in A minor (WoO 59, Bia 515), was first published 40 years after Beethoven’s death, after being discovered by Ludwig Nohl, a German music scholar and writer.

Who was ‘Elise’ in the title Für Elise? What does this title actually mean?

This topic has been an item of curiosity for people around the world, ever since the piece was published!

Now, we get into the more intriguing and potentially romantic question: Who was Elise?

Scholars don’t actually know, for sure, who Elise actually was! Figures, right? However, there are three potential people who may have had the honor of their namesake being referenced by a scribble by Beethoven, at the top of his original manuscript. They are, according to researchers: Therese Malfatti, Elisabeth Röckel, or Elise Barensfeld. I’ll let you read the articles linked to here, to learn about each of these women, each of whom were important people in the composer’s life.

What is the official, full name of Für Elise?

What key, or key signature, was Für Elise written in?

The key of Für Elise is A minor. The scale of A minor (A natural minor) uses only the white keys of the piano, just like the key of C Major. (As such, A minor is called the ‘relative minor’ of C Major, because they both include all the same notes). The key signatures of C Major and A minor are therefore the same: There are no sharps or flats in the key signature of either one.

Is Für Elise easy to play?

The first two sections, which can be called the ‘A’ and ‘B’ sections (this piece is in rondo form, which has the structure AABACA), are relatively ‘easy’ for someone with a late-beginner to early-intermediate playing skills on piano. The same is true for the ‘D’ section, the one with the repeating bass notes. The ‘C’ section is a decidedly more tricky, however, and might be labeled as ‘intermediate to late-intermediate.’

Can I learn Für Elise without reading sheet music? Can I just use “letter-notes” instead?

There are many ways to learn a simplified version of Für Elise. But of course, the traditional sheet music version is the real deal. You can find “Fur Elise letter-notes” out there, which is generally a series of note-names only, sometimes with up-and-down arrows, to help you figure out which direction these note-names are pointing you to next, in relation to what came just before.

You can also “kind of” learn the first part by watching one of a gazillion YouTube videos. Have fun doing lots of rewinds and fast-forwards though.

My sheet music here includes these “letter-note” names. It was originally meant for former students of piano, who need a review of the piano keys and the note-names that traditional sheet music indicates. However, people who play by ear (just for example) who just want to play and enjoy the basic sound of this piece, can follow this sheet music easily, using the note-name labels (assuming you know the note names of your piano keys, of course).

And those up-and-down arrows I mentioned, as often used by “letter-note” sites, are not needed here: When you follow the up and down movement of the actual notes on the page (on the staff), this is much easier to see.

Okay! I’ve included a link to my Für Elise Sheet Music with Letters and Notes Together again, just below. The product description has more detail about this whole question of “letter-notes” as they relate to the sheet music, who can benefit from this sheet music, and more.

I have also included, below that, a link to my complete ‘Clair de Lune’ sheet music, also with letters and notes together.

I am publishing new sheets as we speak, so don’t forget to keep coming back!